It’s pretty much a fact that in a lot of aspects in life, men don’t have to try as hard as women do. And yet, we still continually give them a free pass.

We let them get away with everything

Last night saw Casey Affleck, who has reportedly harrassed women whilst working with them, pick up an Oscar for Best Actor. But of course, this isn’t the first time this happened, by a long stretch. The President of the United States is a known sexual predator. Chris Brown beat Rihanna and still lived a successful career. Meanwhile, Ke$ha speaks out about being raped by her producer, and yet, SHE’S the one who’s looking at having to drop her contract and lose everything. The bottom line is, if a man assaults someone, you can practically hear the crickets.

And of course, the crowning father of “Men Who Got Away With It”, second only to Trump becoming President, Brock Turner and his absolute joke of a prison sentence. Brock Turner was found guilty of raping an unconscious girl behind a dumpster, and was given THREE MONTHS of an initial SIX MONTH SENTENCE in prison, and served COLD STEAK (the audacity!). I have literally had tubes of mascara that have lasted longer than that boy’s prison sentence. This wasn’t just due to Brock being a man, but being an especially rich and white man. If he was black and poor, he probably would have had a sentence at least five times the size.

As well as letting them get away with assaulting and harassing us, we also let them get away with not even SATISFYING us. It’s genuinely upsetting how many women I know that, in their twenties, having been sexually active since around the age of 16/17, are either yet to have their first orgasm, or have literally only just figured out they could have one. “I never thought I could do it until I found so and so” is a far too commonly used phrase. I have a friend who was about to sleep with a guy, until he, for some reason, didn’t think female foreplay was necessary. Men seriously have no idea how our bodies work and they’re not even bothered about trying to learn. Although in fairness to some men, a lot of us fake it, so they don’t even realise they’ve let us down. Because yet again, we’re giving them a free pass by not even letting them KNOW they’ve left us unsatisfied! WHY?! WHY ARE WE DOING THIS?! We’ve been told all our lives to be polite to men and to put them first, and it’s honestly tiring. We need to break out of this habit.

We applaud them for the bare minimum

A couple of months ago, I was talking with a friend about a guy she had just started seeing, and how she was annoyed because she thought he had cheated on her. Then she tells me ‘but then he was so nice, we went back to his and he let me stay over even though I was on my period.’

Hold on a sec – what? Why is it so incredible that a man allowed you to sleep in his bed whilst you were having your period – a normal, bodily function that you can’t control? What was he supposed to do, tell you to go home at two in the morning because sex was off the table? I’ve sat amongst boys who’ve laughed their heads off at one of their mates saying they were en route to their girlfriend’s house, learned she was on her period, and then promptly turned the car around and drove home. Have we seriously not grown out of laughing at guys like that and holding them up as ‘legends’?

Male infidelity is also being weirdly normalised these days. With phrases like “side chick”, “side bitch”, and “psycho girlfriend” (very problematic) littering the Twittersphere, we’re painting a new narrative where women are crazy, and men are just trying to catch a break – with multiple women, because that’s totally normal. An account called “are they loyal?” has even been made, which showcases this gem: 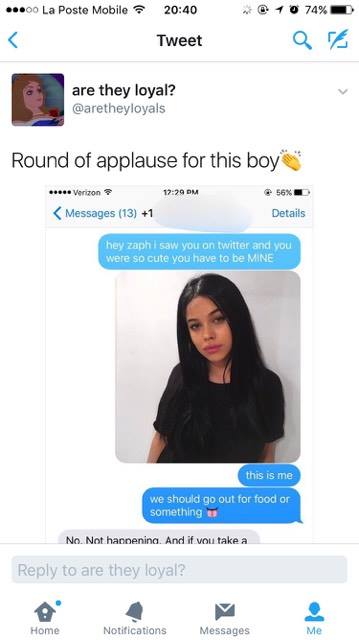 Basically, the guy in this scenario got absolutely praised to high heaven for simply NOT CHEATING ON HIS PARTNER. Since when is that such an amazing thing? Am I really being that “out there” for thinking that it’s completely normal that someone would turn down the opportunity to cheat on their partner, or…?

Seriously, I know girls who put up with SO MUCH crap from their boyfriends. And then we get labelled “psycho girlfriends”, which is in itself problematic with regards to genuine mental health problems, but also begs the question – why do you think we’re like this? Maybe it’s because we’re exhausted from having to deal with presenting ourselves in a way that will pass male approval. So why are our standards not higher? If men drive us so crazy, we should at least do it for ones who are worth it and respect us.

We hide the realities of womanhood from them

Part of the problem is that there’s a whole world that men don’t know about – or rather, cis men at least. We keep them bundled up in cotton wool, away from the scary reality that is being a woman, and then when bits of this seep through the cracks, all hell breaks loose. For instance, why do we care so much about disguising our periods to men? I have another friend who said that her and her Mum didn’t put their used pads in the bin in the bathroom, in case her Dad or her brother saw. I mean, heaven forbid they witness something we witness multiple times a day, for approximately 3-7 days, every damn month! It’s not like they’d even see the blood – just a wad of loo roll in the bin! We’re constantly trying to hide periods from men as if it’s some big secret they can’t know about. Newsflash: I menstruate, as do most other women (and some men!), why is that so shocking? Why should I have to find some secret way of stowing my tampon for the walk across the office to the bathroom? I mean, yeah it’s not exactly a NICE thing to talk about, but we’re acting as if it’s something that point blank doesn’t happen. Keeping this hidden is why men have absolutely no idea what periods are actually like, and in some cases, how they work.

It’s like when Nigel Farage freaked out about breasts being used for their actual purpose. He said that breastfeeding women should sit in the corner – “I think that, given that some people feel very embarrassed by it, it isn’t too difficult to breastfeed a baby in a way that’s not openly ostentatious.”

Although lots of people were rightly up in arms about this, and in the past couple of years, a lot has been done to help further the normalisation of breast feeding, it’s still a taboo in most public spaces. This goes to show how much control men have over our society and the way we perceive female bodies. We’ve been ingrained to see breasts as organs of sexual attraction, as things that simply exist for male pleasure, not as the thing they’re actually supposed to be for – feeding our children. The fact is though, even a lot of women feel this way, and it’s ridiculous. We need to stop thinking of ourselves and our bodies from a male perspective, and start reclaiming them for what they are for – ourselves (and in the case of breastfeeding, our children).

There’s so much more I could say, but I’ll stop before I make anyone else angry. In conclusion, I hope that if, like me, you’re still attracted to men, I hope you find yourself a man that isn’t scared of periods, who doesn’t care about you (or any other people) openly breast feeding, who doesn’t leave it to you to organise every single part of your lives, who is loyal, takes responsibility for his actions, and most importantly – doesn’t expect a bloody medal for it. Cos it’s not exactly impossible, no matter how bad a picture I’ve just painted. We’ve all been ingrained to think as if this is the social norm, so it’s up to all of us to try and change this. The bottom line is, we as women need to stop giving men free passes, and then they will learn to stop expecting them.

One thought on “Why Do We Keep Giving Men a Free Pass?”